My name is Vicky Gallas.

I refer to myself as “the accused madam” for a couple of reasons. I never considered myself a madam and I simply provided business-end services. Each escort was an independent contractor. A jury of my peers agreed with me when I took the state of Florida to trial.

I was prosecuted on racketeering and RICO conspiracy charges and subsequently acquitted in 2003. I owned escort services for a decade in conservative Orlando, Florida.

As with the great majority of adult business related cases between the 1980s and 2008 in the Orlando area, my case involved serious police misconduct. The additional problem of my denouncing the telephone line blocks on escort service numbers in area resorts further propelled my prosecution.

They lost and I won, so I’m still here to tell the story, and it is a story that few have ever heard. I never spoke to anyone with the news prior to trial, and by the time it was over and I was acquitted, few were still interested.

The investigating agency – the Metropolitan Bureau of Investigation (MBI) – did its best to bury the account on all available platforms. You would too, if you were the loser in an organized crime case wherein you listed over 40 state witnesses that actually witnessed nothing whatsoever.

The State of Florida’s case was so weak that agents didn’t have enough evidence to get a wiretap or a warrant to search. Have you ever heard of an organized crime case like that? Me neither. It was a counter-intelligence operation that rivaled COINTELPRO, which, by the way, is alive and well in the U.S. today. Like everything else in life it has merely evolved.

Following my acquittal, I chose to hide in college. I did finish a Bachelor of Arts degree with a major in History. I started grad school; however, soon realized that though I have never been convicted of anything with the exception of a traffic ticket, my criminal records in state and federal databases made me look like the organized crime kingpin that prosecutors painted me to be.

I do hope that you read the book about my story – Memoirs of an Accused Madam – The War on Adult Business in Orlando – Most aliases are eliminated in the Second Edition. 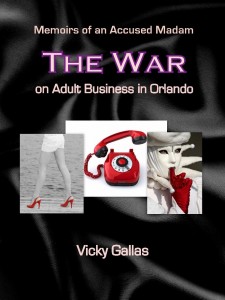 The updated version of Blueprint for an Escort Service is available in the Amazon Kindle store. The updated paperback edition is now available and shows as “in stock” on Amazon.com with a publishing date of February 13, 2012. This book is completely updated as of February 2012. Sorry, but I will not be publishing additional updates. Little has changed since 2012 except the marketing and advertising and I would need to publish a new book a few times a year to keep up with that.